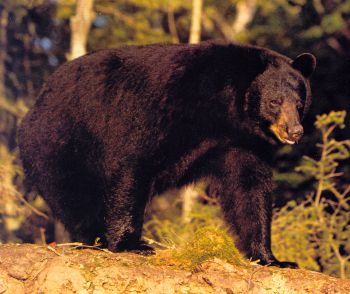 If youve got the nerve to hunt this dangerous game, heres how world-class shooter Doug Koenig and Outdoor Editor Dick Metcalf did it, courtesy of master guide Wayne Bosowiczs Foggy Mountain Guide Service.

Now what about ammunition? For a bear cartridge anything equal to or more powerful than a .41 Magnum or .44 Magnum will be fine. Oldtime black bear hunters say that any load that throws at least a 200-grain or bigger solid bullet at 1000 fps or more will take any bear in the woods. By that standard a good heavy-power .44 Special or .45 Colt handload in the right gun should work fine and has. As for my favorite whitetail .357 Magnum or other similar-caliber load, a well-placed shot with a good bullet will certainly kill a bear, but it’s not recommended. Wayne Bosowicz carried a Colt Python .357 Magnum revolver for years as his bear gun. Then he encountered a situation when a charged-up major boar came down from a tree and soaked up an entire cylinder full of 158-grain JHP ammo in the chest without slowing down. Bosowicz immediately went and bought a Ruger Blackhawk .41 Magnum revolver and has carried a .41 Magnum ever since. He says he has never had it fail to stop a bear on site. 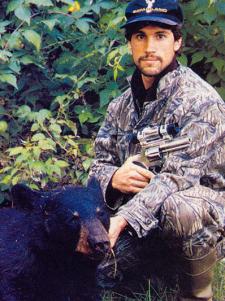 The bullet is the key. A black bear has dense, tough muscles and is covered with thick fur, hide, and fat. You need a bullet that will penetrate all that, and most hollowpoints used in most .41, .44, and .45 cartridges and handloads aren’t very good choices. Bosowicz uses commercial Remington 210-grain JSP ammunition in his .41 Magnum and recommends any similarly structured loads. In a .44 Magnum a 240-grain JSP or a 220-grain or heavier silhouette-style bullet like Federal loads commercially and other bullet makers offer for handloading are also fine choices.

A JSP bullet at a velocity that will completely penetrate the chest of an average-size bear is probably a better choice than a hardcast SWC solid. The JSP will deform while traversing dense tissue, will therefore create a larger disruption channel, and if it goes all the way through it will leave a larger exit wound than a hard, non-deforming cast bullet. One point worth mentioning is that a lot of Foggy Mountain handgun hunters do use 210-grain JHP .41 Magnum and 240-grain JHP .44 Magnum ammunition in revolvers and have killed bear very efficiently. Of course, at the velocities they are getting from six- and eight-inch revolver barrels, these hollowpoints are not expanding, and their effect is actually the same as if they were JSPs. And if you do select a cast bullet for your bear load, use a softer alloy that will deform in muscle tissue.

You’ll have to make your own specific choice. After all, that’s part of the fun of dreaming about and getting ready for a hunt. And if you use a minimum .40 caliber, a minimum 200-grain solid deformable bullet, and a minimum 1000-fps velocity from your chosen gun, you’ll have a load that will anchor any black bear that stands in your sights.

On last September’s hunt Doug Koenig used a Colt stainless Anaconda .44 Magnum with a four-inch barrel and the red dot sight described earlier. He would have liked a longer barrel, but this was the only Anaconda he could get on short notice and any other make of .44 Magnum was out of the question because Doug shoots competitively for Team Colt. His cartridge was a handloaded .44 Magnum employing a Sierra 220-grain MCP bullet over 25.0 grains of Accurate Arms No.9 powder for about 1250 fps from the four-inch gun. It was a good choice of bullet; the Sierra 220 grainer was originally designed for metallic silhouette competition (it is commercially loaded by Federal) and has a thick jacket that curls up over the ogive and leaves only a small circle of core lead exposed on the tip of the nose. Strong on penetration, it will nonetheless deform if it encounters tough tissue or bone.

My own choice of arms for this Maine hunt was a new Taurus double-action .44 Magnum with the factory-issue ported eight-inch barrel. I had just finished reviewing the gun for our sister publication Shooting Times and thought I’d give it a real field workout. My own choice of ammunition was Remington’s tried-and-true factory 240-grain JSP load. On paper, it’ll put five in one hole from the Taurus at 25 feet – what more do you need?

The hunt itself had a high frustration quotient. The trip took us 50 miles deep into the dense wilderness forests of northern Maine and left us to sit out in our blinds and confront our quarry alone, at close quarters, with no backup but our own shooting abilities and presence of mind. Doug got a bear. I didn’t. That’s why they call it “hunting.”

Our blinds were far up in Maine’s central highlands near Mount Katahdin, and we had a wind problem from day one – swirling winds disrupt the woods’ normal scent patterns and make bear very nervous and even more reclusive. Plus an early major storm blew in from the ocean and completely drowned us out for one full day. It was a tough week.

While Koenig’s incredible competition career has been widely reported, it is less widely known that he is an intensely committed hunter as well. When the match season is over each fall he goes back to his Pennsylvania home and takes to the woods literally – for the next four months, and he has successfully hunted whitetails, elk, and other game with gun and bow all over the country. This was his first handgun hunt for bear, and he had hoped to score quickly so he could get back home and practice for the USPSA National Championships. So when each unsuccessful day rolled by, his evening remark would be, “Well, I guess I’ll stay just one more day.”

His patience was rewarded. In the last few minutes of visible light on the last day of the hunt schedule, the first-seen bear of the week approached his bait. Doug’s treestand was in less dense cover than usual, and his eye caught its movement through a gap in the brush about 40 yards out. The bear was extremely wary, moving laterally beyond the bait as Doug tried to track brief glimpses through the cover with his dot sight. Then the bear spun and ran directly away at full speed crashing through the brush. At about 60 yards it was momentarily visible between two trees, going rapidly away at a slight angle. Koenig placed the dot behind its front shoulder and fired. The bear disappeared.

Doug got down and went to the point of fire and found an immediate blood trail, which he followed into the twilight (for a few understandably tense moments). The bear, a 225-pound sow, was lying dead 50 yards along. The bullet had entered at a shallow angle at point of aim behind the shoulder, skimmed along the outside of the rib cage, and exited through the center base of the neck, severing all major blood vessels. It was a heck of a shot on a running animal in dim light at 60 yards through a thread-needle gap. The kid is no slouch.

How did I do? Not quite so well. I sat motionless in my ground blind through wind and rain for a week, with the sound of Doug’s shot from a mile away the only high point. I even stayed over for a few more days into the next hunt cycle, but still no bear at my bait buffet. Oh, well. Maybe I scratched at the wrong moment. I’ve taken trophy bear with Wayne Bosowicz at Foggy Mountain before, but not this time. That’s why they call it “hunting,” and I’ll be back to try again.

Back to previous section “Choosing a Bear Gun“

Back to beginning of “How to Hunt Black Bear“

How to Hunt Black Bear can be read in the July/August 1995 issue of Handgunning. See page 60.