Note: Foggy Mountain is not currently offering deer hunts. This information is provided for those interested in hunting on their own.

Trophy deer hunting in Maine is an exciting challenge for every hunter. We do not have many deer but do have some real BIG DEER like to one at the right that field dressed at 225 pounds and qualified our hunter for Maine’s famous “Big Bucks Club.” There’s nothing bigger or smarter than an old Maine buck. The satisfaction in tagging one is well earned!

A guide is not necessary in this area. Although this is a NON-GUIDED hunt, we know where the deer are working and we will take you around and show you some good deer country at no additional charge.

Hunt with Firearm, Bow or Crossbow

Also, grouse season is open, so bring a shotgun if you would like to bird hunt. PLUS, you can also shoot a BEAR.

Maine is home to one of the largest of the 30 recognized subspecies of white-tailed deer. After attaining maturity at age five, our bucks can reach records live weights of nearly 400 lbs. Most adults bucks, however will normally range from 200 to 300 lbs live weight, and will stand 36 to 40″ at the shoulder. Does are considerably smaller; they normally weigh 120 to 175 lbs live weight. Newborn fawns begin life at 4 to 10 lbs, but grow to approximately 85 lbs live weight in their first 6 months of life. 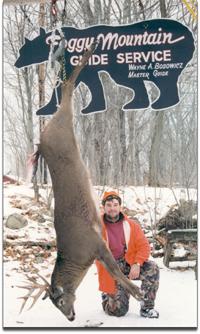 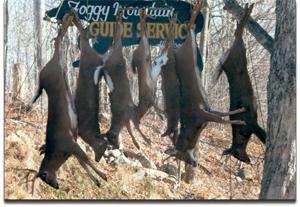 For over 35 years, we have been dedicated to good stewardship of the land and wildlife and committed to making each guests visit one that memories are made of.